As soon as the Canadian Parliament is established in Ottawa in 1857, Francophones arrive in the capital – as MPs and members of political staff, as well as officers of Parliament, librarians and translators. They come from diverse regions: Montréal, Québec, Vaudreuil-Soulanges, Saint-Jean-sur-Richelieu, Salaberry-de-Valleyfield, Joliette and Sherbrooke. Later they come from Caraquet and Moncton, from southern Manitoba, from Peace River and from Vancouver. The city would not have become an intellectual magnet for French Canada without these politicians of all parties, without these civil servants increasing in number as new departments and new agencies are created, or without the individuals employed by the capital’s many organisations. It is as true today as it was then.

Since the last third of the nineteenth century, French Canadians from across the country have been coming to Ottawa to work and raise their families. While maintaining close ties with their home environments where they remain active, these adoptive “Ottawans” engage in the community and cultural life of the capital. They write for Ottawa newspapers and magazines. They work on the front lines when it comes to advocating for Francophone rights in the capital.

Rémi Tremblay, who comes to Ottawa in 1880 to work as a translator, is a good example. In 1888, Tremblay is dismissed from his position as a translator in the House of Commons as a consequence of his support of Métis leader Louis Riel. He does not return to service until 1896. Tremblay’s son, Jules, follows his father to Ottawa after completing studies in Montreal. Jules writes for several newspapers, then takes up a position as a translator in the federal government in 1919. He climbs the ladder of success to become the chief translator in the House of Commons, while also pursuing a career as a writer. A member of the École littéraire de Montréal, Jules Tremblay actively participates in Ottawa’s French-Canadian cultural network, which he even portrays in his writings.

Pierre Daviault and Guy Sylvestre also become adoptive Ottawans. Originally from Québec, they spend most of their working lives in Ottawa. Pierre Daviault is a journalist on Parliament Hill before working as a translator, editor, and then superintendent of the Translation Bureau. He is credited with offering the first professional translation course at the University of Ottawa. Guy Sylvestre holds various positions before becoming the private secretary to Prime Minister Louis Saint-Laurent. While Tremblay, Daviault and Sylvestre pursue their careers in Ottawa, their commitment to Francophone literary, cultural and social life extends to Montréal, Québec and the whole of Canada.

These Ottawans from out of town are often only passing through. Politicians and public servants as well as journalists, writers, theatre professionals and university professors who are born and raised elsewhere come to Ottawa to pursue a career, but often leave the city once they retire. Archivist Michel Lalonde states that “there is always, in the Ottawan who comes from somewhere else, a certain feeling of exile.”1 One cannot, he argues, understand French life in Ottawa without bearing in mind that many of the Francophones who enliven the city do not fully live there.

Do you need to live in Ottawa to be an Ottawan?

Pages 1 and 2 of a draft letter from Rémi Tremblay to Honoré Mercier, Premier of Quebec, asking him to help after his resignation as editor of the newspaper La Justice de Québec. Tremblay had opposed the execution of Métis leader Louis Riel, and had already been dismissed from his position as translator in the House of Commons in Ottawa for that reason. Quebec, September 16, 1889. 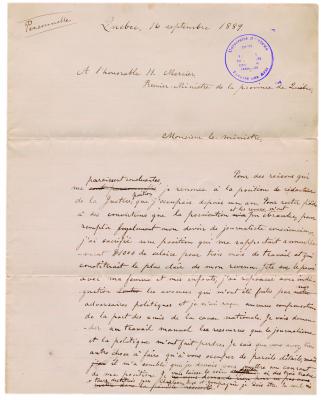 Manuscript of the poem “Les Bonzes,” by Jules Tremblay, [between 1909 and 1925]. Although he was a member of the École littéraire de Montréal, this adoptive Ottawan actively participated in Ottawa’s French-Canadian cultural network, depicted in this poem. 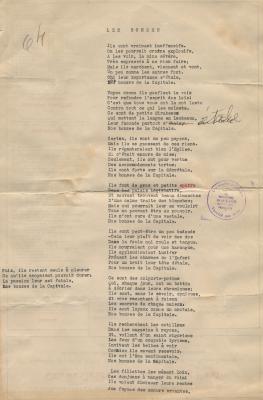 Vanier : a village within a city
Rivalry with the Irish