In November 1987, the Lortie Report – named after the Chair of the Task Force studying the designation of Algonquin College as a French-language institution under the French Language Services Act – drops a bombshell. The French sector of the college must be granted full autonomy. The announcement begins one of the most important concerted movements in the history of French Ontario, which leads to the opening of La Cité collégiale in Ottawa barely two years later.

It is Francophones at the college, dispersed among the many teams involved in producing the report, who launch the offensive. Galvanized by the Peterson government’s commitment to soon create the first French-language school boards, they bring together the province’s leading education organizations, and set in motion a particularly well-orchestrated lobbying plan. On January 12, 1989, Lucien Bouchard, Secretary of State, and Lyn McLeod, Ontario’s Minister of Colleges and Universities, announce the creation the first French-language community college in Ontario. A board of directors is appointed to establish an institution that meets the community’s expectations.

La Cité collégiale opens its doors in September 1990, in temporary premises on St-Laurent Boulevard. All French or bilingual programs at Algonquin College and St. Lawrence College in Cornwall are transferred, along with their respective staff. The clientele clearly exceeds the most optimistic forecasts: 2,300 students in the first year, gradually increasing over time to stabilize around 5,000 students. The institution, known for its applied and relevant programs, attracts many residents from the Outaouais region of Quebec. The range of courses on offer constantly expands. In 1993, the college acquires land near the Aviation Parkway and, in September 1995, the permanent campus of La Cité collégiale is ready for the fall sessions. The architects who design it seek to symbolize Franco-Ontarian identity, enshrined in the wider community.

The Cité collégiale’s goal is to meet the college education needs and aspirations of the nearly 200,000 Francophones living in Eastern Ontario. It seeks to provide them with quality training in French, adapted to the local and regional employment market. The college has put in place mechanisms for consulting and working in partnership with regional businesses and public agencies to ensure that they are at the cutting edge to meet the training needs of the workforce. As a result, it has quickly established itself on the regional economic scene. Even more importantly, it contributes to the development of the Francophone community by creating a living environment that encourages pride in being Francophone, here and elsewhere, in Ontario and around the world.

The college changed its brand image in 2013, giving itself a new logo and a new name: La Cité. The official name of the establishment nevertheless remains La Cité collégiale. 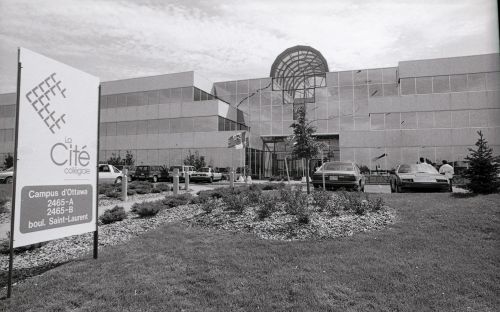 Algonquin College and the Francophone community
See on the map >

“Loi de 1986 sur les services en français: rapport du groupe de travail” (French Language Services Act: Task Force report), Ottawa, Algonquin College, 1988, cover page and “Mot de la présidente” (Message from the chair). Stopping just short of mentioning a new college, the Task Force recommends that the Francophone school sector should have the benefit of full autonomy at the college level. In her introductory remarks, the chair of the Task Force reiterates the community’s position regarding the need for a 23rd Francophone Community College. In this context, it is difficult for the Government of Ontario not to give serious consideration to the concept of a French-language college in eastern Ontario.

Timeline of the events leading up to the creation of the French-language college, 2 pages. The task force mandated by Phillip Killeen, President of Algonquin College, to produce an action plan for the designation of the college under Bill 8, submits its report on January 18, 1988. Barely a year later, an announcement is made regarding a cost-sharing agreement between the Government of Ontario and the federal government to create a French-language college in eastern Ontario [n.d.].

The Cité collégiale’s first board of directors

News release announcing the appointment of the board of directors for the new French-language college in eastern Ontario by the Ontario Council of Regents for Colleges of Applied Arts and Technology, April 24, 1989, p. 1 to 3. The board of directors is composed of 12 members from various sectors of collective life. The new college will thus benefit from diverse expertise, not to mention government relations experience held by certain members. 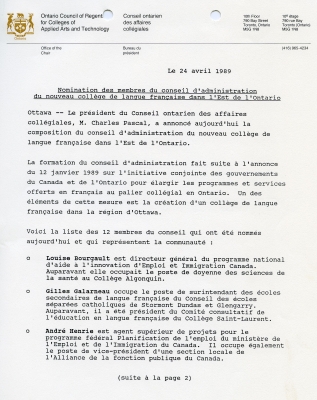 Bulletin from the Association des professeurs francophones du Collège Algonquin (APFA) announcing the “Un nom pour notre college” (A name for our college) contest, March 1989. This competition, organized by the APFA is a tremendous vehicle for rallying the local and regional community around the future institution. 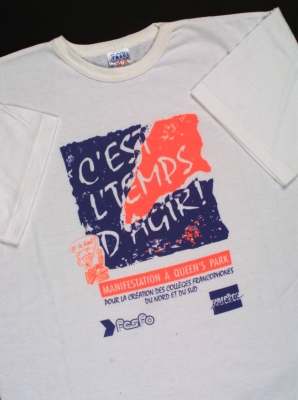